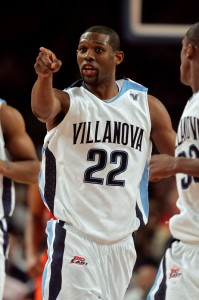 Dwayne Anderson vs. Syracuse in the 2008 Big East Tournament. (AP)

Mike Sheridan is back with his latest installment of 'Nova Notebook. This week's feature looks at rising senior, Dwayne Anderson.

The article discusses how he was mentored by Foye, Ray, Lowry, and Sumpter in 2005 and how Anderson looks to pass those leadership qualities onto this year's Wildcat squad.

It seems last year's loss to the eventual National Champion, Kansas, has fueled the Wildcats through summer practice. Could that be the fuel to a successful 2008-09 season?