Basketball Interview Challenge has posted an interview with former Villanova Head coach, Rollie Massimino, that was conducted earlier this week. 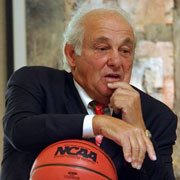 Rollie discusses the 1985 Championship Game as well as coaching at Northwood University.

His potential recruits, who were born around 1990, have no recollection as to what Massimino accomplished during his illustrious career as the Head Coach of the Villanova Wildcats.