Share All sharing options for: Curtis Sumpter Signed and at Clippers Camp 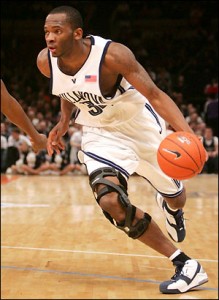 We brought the news to you almost two months ago that Curtis Sumpter ('07) was to sign with the LA Clippers. Finally, an official note from the NBA was released over the weekend. The details of Sumpter's signing haven't been released.

Sumpter will join fellow Villanovan, Tim Thomas, and 16 others for the LA Clippers' Pre-season Camp.