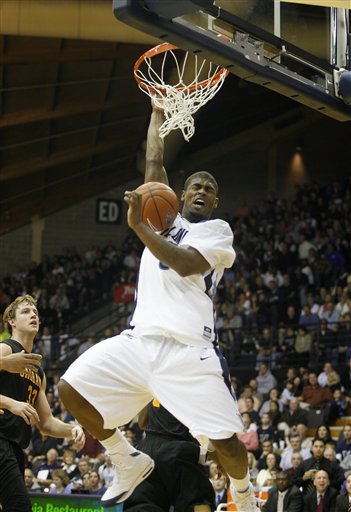 Sophomore Antonio Peña is averaging around 24 minutes of play this year. But if we look at the Texas and Marquette games, Villanova's two losses, we can see that Peña has logged 9 and 7 minutes respectively. To put this into perspective, his third lowest minute total is 20. Looking at those numbers it's fairly easy to note a correlation.

Let's look at those games...

Against the Longhorns, 'Tone played 9 minutes with 0-2 shooting, 2 turnovers and a foul.

In the Big East opener, he played 7 minutes and was held scoreless, but was still able to grab 4 rebounds and get an assist. However he did rack up 3 fouls- the first two occurred in a close game when 'Nova was up 10-8 and 13-10. His third foul came quickly in the first 10 seconds of the second half.

Jay Wright is a coach who plays the match-up which, coupling with Peña's quick fouls, was probably a reason for limited minutes against Marquette given their smaller, quicker guard-oriented lineup. However it is hard to see why his play was limited against Texas, a team who featured multiple big men.

With Dante Cunningham's effective mid-range jump shot emerging, having another "big" (loosely used Nova term) option down low as Dante draws his man from the basket- that big needs to be Antonio Peña.