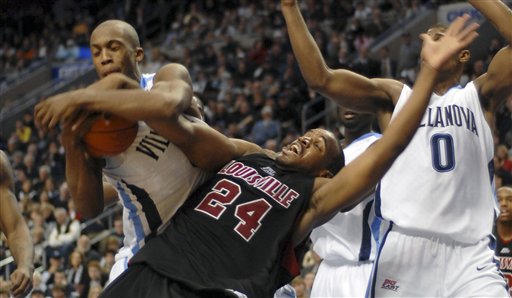 Villanova had opportunities at the end today, but couldn't convert in a 61-60 loss to Louisville.

Free Throw shooting was the Wildcats' nemesis today as 'Nova went 6 for 14 from the stripe in the final 9 minutes of the game. This includes Antonio Pena's was unable to add to his 14 points as he had two misses with less than 5 seconds remaining in the game.

Dante Cunningham led Villanova with 21 points and Scottie Reynolds added. If there are any positives that come from this, Dante's Tally today puts him in Villanova 1,000 Point Club.

Jay Wright after the game...

Right now, this loss kills you. We had some chances and didn't take advantage of them. We usually are a good free throw shooting team. It was just one of those days. As a coach, you know they are going to happen. I was hoping it was out of our system earlier in this game.

Tomorrow we will wake up and we'll look at this and learn from our mistakes. In this league you have to put these games behind you.

with respect to an 8-day layoff...

...after one like this you wish you could get back out there on Monday night.  I really have to make sure we don't dwell on this.