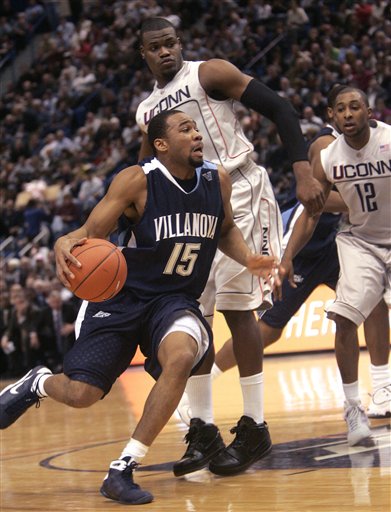 The Wildcats fought hard but the #3 Huskies from Connecticut proved to be too much tonight as Villanova lost 89-83.

Tied at the half 48-48, 'Nova was in the game and proved to be very pesky as UConn couldn't put them away until the final seconds of the game.

Villanova had 5 players in double digits with Dwayne Anderson leading the way with 15. Scottie Reynolds had 14. Corey Stokes, Reggie Redding and Antonio Pena each had 12. AJ Price scored a career-high 29 for UConn.

On the battle of the boards, 'Nova was only out-rebounded by 1, 31-32. But the Cats had one more offensive rebound.

Villanova heads to Tampa to face USF this weekend.

Quotes from the Game
Calhoun on beating Villanova

Jay [Wright's] teams really come at you. They attack you defensively and they have good players…..It was a war. It was a great win for us and a real tough loss for Jay’s team, which has in my opinion had the toughest losses in the league.”

“Teams get to No. 1 and they think they’re never going to lose again. It’s just hard to win on the road. Any road victory in our conference is a significant win. It’s very difficult to win every game, and to stay at the top you have to win every game.”