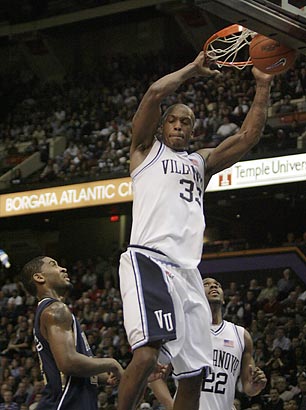 The knock against the #21 Villanova squad was that they haven't won a "big game"- all 4 of their losses had come to teams ranked in the Top 15. That ended on wednesday night as the Wildcats knocked off #3 Pitt at the Wachovia Spectrum behind a career-high 18 points by Reggie Redding.

Dante Cunnigham threw in an additional 15 points as 'Nova improved to 16-4 (4-3) on the year as the 'Cats sported throw-back unis on 80s Night.

Villanova took the lead 49-48 with 8 minutes to go in the game and never looked back as the Panthers struggled in scoring only one field goal in the final five minutes.