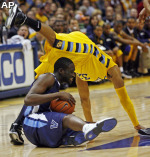 What seems like an eternity ago back on New Year’s Day, the Wildcats opened their Big East season (then 13-1 record and ranked #15) in Milwaukee against an underrated Marquette Golden Eagles team, then 11-2 and ranked #25 by USA Today/ESPN. The Golden Eagles prevailed on that day, 79-72.

Jerel McNeal led the way for Marquette with 24 points, including a critical 3-pointer with 3:55 remaining, giving the Golden Eagles an eight-point lead that Villanova could not overcome. Marquette shot 46 percent from the field, including 41.7 percent from 3-point range. Matthews and James, who round out their outstanding guard trio, scored 19 and 17, respectively. Lazar Hayward added 15.

Villanova forced 19 turnovers, but only six in the second half. They were led by Corey Fisher, who enjoyed his second consecutive outstanding game, scoring 21 off the bench. Dante Cunningham added 16 points and 8 rebounds and Scottie Reynolds was good for 15. Villanova struggled from outside, hitting only 6 of 20 from 3-point range.

Fast forwarding six weeks to Tuesday, the #17 Wildcats (19-4, 7-3 Big East) look to avenge their New Year’s Day loss, riding high on a five-game Big East winning streak that began on January 24. On the other hand, #8 Marquette (20-3, 9-1 Big East) saw its hopes for an undefeated Big East season come crashing down on Saturday at South Florida as they became the final conference team to fall losing 57-56 to the Bulls. The Golden Eagles looked little like the team that started 9-0 in conference play. Their heralded shooting touch was missing, both from long range and the free-throw line. They shot 4-for-24 from 3-point range, and 10-for-23 from the charity stripe.

Marquette also struggled but won against DePaul, despite a lack of offensive production. In that game, Wesley Matthews went down hard with a hyper-extended knee in the second half, blocking a layup and then collapsing under the basket. However, he is expected to be ready to face Nova.

The Golden Eagles rely on their big four, Matthews, Jerel McNeal, Dominic James and Lazar Hayward, to provide most of their offense. It’s proven wildly successful so far, but there’s not a lot of depth ready if there’s a foul trouble or a serious injury.

Villanova and Marquette are tied in their historical series at 6-6, but Nova is 1-3 since MU has entered the Big East in 2006.

Tip-off is slated for 7:30pm ET at the Pavilion and will be shown on ESPN2.