This Is Our House -- Nova Takes Sixth Straight

Share All sharing options for: This Is Our House -- Nova Takes Sixth Straight 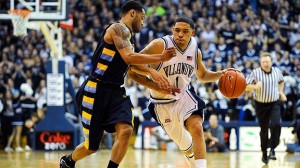 Marquette’s big four (McNeal, Hayward, Matthews and James) did their part, scoring 75 points. As a team Marquette shot 51% from the field and an amazing 48% from behind the 3-point arc. On New Year’s Day, that may have been enough to put away the Wildcats. But not on this night … not in our house. Number #13 Villanova avenged its New Year’s Day loss, putting away the #10 Golden Eagles 102-85. Nova shot a blistering 59% from the field and 54% from 3-point range. The Wildcats were simply too deep and too much for Marquette, putting five players in double figures, led by Reynolds (27), Fisher (21), Clark (16) and Cunningham (15). Nova’s bench continued its recent phenomenal play, outscoring Marquette’s bench 32-17.

Tonight’s win was a fitting encore to its victory on Saturday over then #20 Syracuse by an almost identical score (102-85). It added to a recent string of dominating performances over a six-game winning streak that includes three wins over Top 25 teams, including #4 Pittsburgh. The streak coincides with the emergence of an explosive offense that has topped 90 points for three consecutive games. While all seems to be going the Cats way, there is some cause for concern as Dwayne Anderson (10 points) left the game with a leg injury early in the second half and did not return.

Nova now stands 5th in Big East Standings with an 8-3 record (20-4 overall), trailing Connecticut, Louisville, Pittsburgh, and Marquette. They are riding high as the travel to West Virginia to play the Mountaineers on Friday (ESPN, 9PM).