The Butler Did It -- Mountaineers Top Nova

Share All sharing options for: The Butler Did It -- Mountaineers Top Nova 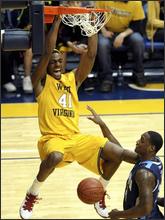 Our pregame analysis described the West Virginia Mountaineers as a dangerous team, despite their then 5-6 Big East record, with a strong defense and the ability to blow out opponents when they are playing well. Unfortunately for the #13 Cats, the unranked Mountaineers chose last night to have their best game of the season, winning by 22 (93-71) and emphatically ending the Cats six-game winning streak. Nova fans can take solace in the fact that beating the Cats is considered a "signature win" on the Mountaineer’s 2009 NCAA resume.

Both teams got off to a slow start, and West Virginia broke a 2-2 tie with 16:46 to go and never relinquished the lead. Nova’s fate was determined early when Dante Cunningham picked up two quick offensive fouls and sat out the remaining14:09 of the first half. With Dante on the bench, the Mountaineers deployed a smothering defense that kept the Cats out of synch. On offense, the Mountaineers passed brilliantly, breaking Nova’s trap for open shots. At times, it seemed they made every shot and grabbed every rebound. Nova had no answer for junior forward Da’Sean Butler, who looked like Kobe Bryant hitting threes and midrange jumpers. He scored 24 points on 8 of 13 shooting in the first half alone and a career high 43 points for the game, 26 better than his average.

Down 18 at the start of the second half, but with Dante back in the game, the Cats played with energy and cut the lead to 13 with six minutes remaining. However, Nova’s hopes faded as Redding fouled out with 6:08 to go followed by Reynolds at the 4:39 mark. For the game, Nova shot only 42% from the field and 28% from beyond the 3 point arc.

Coach Wright, always a class act, was quoted by the Philadelphia Inquirer saying, "Obviously, we didn’t do a lot of things well, but I don’t want to take away from what West Virginia did. They were just great. They got into us and really pressured our perimeter people. The way we usually take that away is Dante Cunningham, but he got into foul trouble early. Defensively, we just didn’t have an answer for Da’Sean Butler."

Fisher was clearly a bright spot for Nova, absorbing bone-jarring picks, hitting threes and driving fearlessly to the hoop. He finished with 17 points on 6/10 shooting. Stokes scored 15, and hit 3/6 from three-point range. Reynolds had a tough game with 12 points but was only 1/5 from behind the arc. Dante played well when he was in the game, but foul trouble again limited his impact. He finished with only 7. A very tough Dwayne Anderson played with a hyper extended knee, but clearly was not 100%.

Nova remains 5th in the Big East with an 8-4 record, 20-5 overall. They have six days to get healthy and back on track when Rutgers visits the Pavilion on Thursday at 9PM (ESPN or ESPN2).