Share All sharing options for: Nova Sweeps Syracuse In A Nail Biter 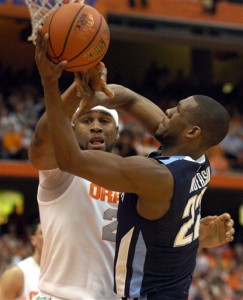 Villanova held on for a hard-fought 89-86 victory at the Carrier Dome, sweeping its home and home series against the Syracuse Orange and its fifth win in the last six meetings of the teams.

Villanova led for 38:26 of the contest but the game was not decided until the closing seconds. Sloppy play against the Orange defensive pressure down the stretch allowed Syracuse to close a nine point lead at the five minute mark. Syracuse, however, missed six shots in the final minute, including furious barrage of three point attempts in the final seven seconds. Jonny Flynn’s three point attempt from the left corner bounced off the rim and Dante Cunningham grabbed the game’s final rebound with two seconds remaining as Nova escaped with a three-point win.

The Wildcats seemed to be in control for most of the first half, ending the period with a 46-40 advantage. Dante Cunningham and Dwayne Anderson led the way for the Cats in the first half, combining for 21 points. Both teams shot an identical 55% from the field and 66% from the free throw line but Nova got to the charity stripe more often.

Syracuse went on a three minute tear at the 16 minute mark in the second half, with three-pointers from Devendorf and Rautins, outscoring Nova 14-2 during the stretch and taking a two point lead. But Nova answered with a two minute outburst of its own at the 12 minute mark, punctuated by emphatic dunks by Dante Cunningham and Dwayne Anderson.

Dwayne Anderson was named Player of the Game, scoring a career-high 22 points on 57% shooting, including 4-6 from three point range. Five other Cats scored in double figures, with strong games from Shane Clark (15 points on 75% shooting from the field) and Corey Fisher (16 points on 83% shooting). Dante Cunningham led all rebounders with 12 and another double-double. Eric Devendorf, Paul Harris, and Andy Rautens combined for 61 points for Syracuse.

The much anticipated match up of Jonny Flynn and Scotty Reynolds did not quite live up to its billing. Flynn was slowed by flu-like symptoms and scored only 12 on 5-17 shooting from the field. Reynolds had another subpar game with 10 points, was only 1-5 from three-point range, and had critical turnovers in the closing minutes as Syracuse pressed in the backcourt.

Villanova all but secured a spot among the top five teams in the heavily contested Big East standings, moving three wins ahead of Syracuse, which dropped into a ninth-place tie with Cincinnati. However, they must finish in the top four to earn a double-bye in the Big East Tournament.