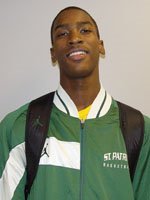 Mike Gilchrist, a 6'7" sophomore from St. Patrick's (Corey Fisher's alma mater) is arguably one of the Top 5 recruits for the Class of 2011. Last week he gave out a list of his top 5 that included Villanova along with Memphis, Rutgers, UConn, and UVa.

Currently Gilchrist is nursing a broken foot and is possibly out for the rest of the season.

This article notes that Gilchrist commutes from Camden to Elizabeth everyday to go to St. Pat's.

The Gilchrist family is friendly/tight with World Wide Wes. William We$ley is *cough, cough* an "Ambassador of the Memphis program" according to Memphis Coach John Calipari.

Even though 'Nova is the close to Gilchrist geographically, the family's ties to World Wide Wes and We$ley's ties to Memphis would have to put the Tigers in an unspoken lead to land Mike.