Share All sharing options for: Jay Wright: Big East Coach of the Year 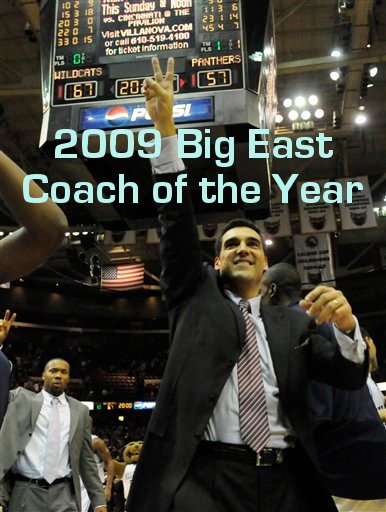 We got word from a couple of sources yesterday, but it is official now. Jay Wright has been named


Big East Coach of the Year

Coach Wright earned the same honor in 2006 when he additionally grabbed the National Coach of the Year.

Villanova was pegged to finish 5th in Big East in the pre-season polls, but Jay Wright led 'Nova to a 25-6 record going 13-5 in the tough conference.

It’s obviously an honor. In this league I think I speak for all the coaches, we’re all honored just to be a part of it. Most of us came up learning from Louie Carnesecca, John Thompson, Rollie Massimino and P.J. Carlesimo. In this conference we all have great respect for one another and to be voted by these coaches means the world to me. I have great respect for them and for what kind of men they are.