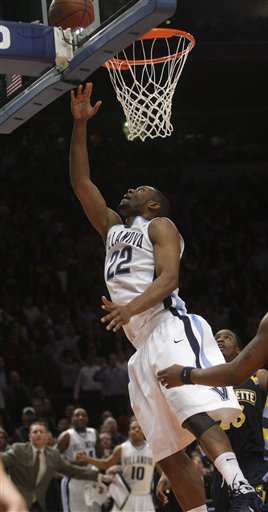 Villanova outscored Marquette by 16 in the first half.

Marquette outscored Villanova by 17 in the first 19:59 of the second.

It took a dish from Reggie Redding to Dwayne Anderson who converted a layup with 1 second remaining to secure a Wildcat matchup with Louisville tomorrow.

The basket was Anderson's only made shot of the game.

In a game with many series of runs, Villanova had the ball at the end of the game to beat Marquette 76-75 in a quarterfinal game in the Big East Tournament. 'Nova was up 16, 47-31 at the half, but had led by as much as 17. But Marquette hit 8 3-Pointers in the second half to pull even with and taking the lead from the Wildcats with 1:36 to go.

Villanova moves to 26-6, and will face #1 seed Lousiville tomorrow at 7p ET.

Reggie Redding fell on his back, screaming and kicking like a little kid who just opened the greatest Christmas gift ever. His teammates jumped like mad men all around him while Madison Square Garden erupted, finally rewarded with a finish befitting this insane league.