Whoa. That was a little too close. 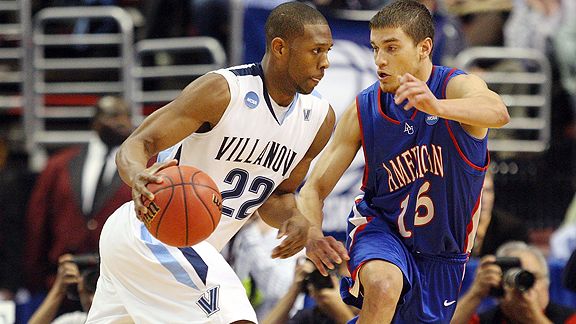 Dwayne Anderson and Dante Cunningham each scored 25 points to lead the Cats over American University in the first round of the NCAA Tournament 80-67.

After falling behind in the 1st half and trailing 41-31 at halftime. The Cats rallied from a 14 point deficit in the 2nd half to win 80-67 over a pesky American University.

The crowd at the Wachovia Center started to really get loud in the 2nd half to help push the Wildcats through their 19-2 run to take the lead.
Villanova trailed 45-31 early in the 2nd half. They clawed their way back to tie the game 55-55 with just under 8 minutes left in the game. Then Dwayne Anderson came down to hit a 3 pointer to put the Cats up for good.

American got into foul trouble early in the 2nd half and Villanova took advantage by shooting 26-29 from the charity stripe.

Villanova will not be able to have this kind of start on Saturday when they take on UCLA, who held on to beat VCU 65-64.