Nova Wins One For the Geezer

Share All sharing options for: Nova Wins One For the Geezer 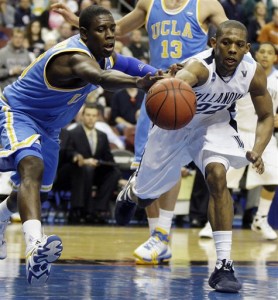 It was 38 years in the making, but well worth the wait. With Jack Kraft and most of his 1971 Villanova team sitting near courtside and Coach Rollie Massimino standing behind Villanova’s bench, the Cats finally avenged their March 1971 loss to UCLA in the NCAA finals. Somewhere in heaven, Howard Geezer Porter is flashing a big toothy smile. Revenge is sweet.

The Cats won in style with an 89-69 victory that was never in doubt. With the win, they have reached the Sweet 16 for the fourth time in five years, and in the process ended UCLA’s bid for a fourth straight Final Four appearance. The Cats (28-7) will next play the Texas-Duke winner in the East Region semifinals in Boston.

I was worried about this game. The mystique of UCLA, a team that had been to the tournament 42 times, reached the final four 18 times, and won eleven championships could have intimidated lesser teams. The Bruins are stocked with veteran players with plenty of tournament experience. They shot the lights out for most of the regular season. They had size and quickness. None of that mattered because Nova played arguably its best game of the season and demonstrated superior strength, athleticism, and mental toughness.  Coach Jay Wright crafted a brilliant game strategy and the team executed flawlessly.

Playing before a loud and partisan home crowd, the Cats gave their fans plenty to cheer about. They were relentless at both ends of the court, with a smothering defense that held the Bruins, a team that shot 50% during the regular season, to only 42% shooting and forced 19 turnovers. Villanova jumped on UCLA early and never let up. A 19-2 run that started five minutes into the game put the Wildcats ahead 28-11 half way through the first half. They were in control the rest of the way.

The Cats fouled 22 times, but distributed their fouls well and made every one count. The relentless pressure clearly rattled UCLA and they simply could not get on track offensively. At one point in the game, TV analyst Jay Bilas compared UCLA to kids getting schooled in a Philly playground game by a bunch of savvy 30-year old men. It was a wonderful analogy … men verses boys.

On offense, Nova played as well as it has all season. The ball movement was excellent. The guards slashed and dished the ball. Villanova’s transition game was in high gear and UCLA never was able to establish its defensive game. Nova’s energy never waned; they relentlessly attacked the glass. The scoring distribution was outstanding. Not a single Nova player scored 20 points, but six were in double figures. They were led by another double-double by Dante Cunningham who scored 18 points and grabbed 10 rebounds, despite extended bench time in the first half due to foul trouble. Corey Fisher was brilliant, scoring 13 on 4-7 shooting and 4 assists. Fisher played in high gear, driving fearlessly to the hoop and again making the kind of circus drives that defined Villanova when it was playing its best ball in mid-February. Fisher simply made everyone around him better when he was in the game and earned Player of the Game Honors. Reggie Redding had another outstanding game, playing point at times and gathering 6 assists to go with 13 points on 4-7 shooting. On one play in the first half, Redding threaded the needle for an alley-oop to Cunningham that surely will make the year’s highlight reels.

Dwayne Anderson, arguably the heart and soul of this team had another outstanding game and a double-double, scoring 10 points, grabbing 11 rebounds and 4 steals. On one play, Anderson dove from well behind the play on a UCLA fast break to strip the ball, slid about 25 feet on his chest, and regained possession of the ball. Moments later and exhausted, Anderson took a seat on the bench next to Associate Head Coach Pat Chambers. Chambers expressed what every Nova fan was feeling when he leaned over and kissed Dwayne on the top of the head. CBS showed the replay three times.

If Nova can play like this next week, they are capable of a deep run. The last time I had this feeling was in March 1985. I can’t wait for Thursday to arrive.