Win One For The Geezer

Share All sharing options for: Win One For The Geezer 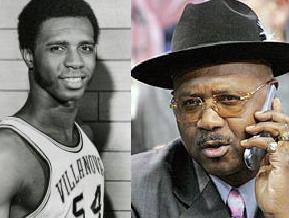 I can remember exactly when I became a Nova fan. It was nineteen days after Philadelphia’s Joe Frazier defeated Muhammad Ali at Madison Square Garden in the first of three epic bouts. On March 27, 1971, a Cinderella Wildcat team led by Howard "Geezer" Porter concluded a two-week run in the 1971 NCAA Men’s basketball tournament that included wins over St. Joes, 10th ranked Fordham, 4th ranked Penn and 7th ranked Western Kentucky. Reminiscent of Hickory High School in the movie Hoosiers, the Cat’s improbable run landed them in the massive Houston Astrodome for the national championship game against the UCLA Bruins, winners of six national championships in the prior seven years. UCLA was led by legendary coach John Wooden and consensus All-American seniors Sidney Wicks and Curtis Rowe. While the Cats ultimately lost that game 68-62, Porter scored 25 points and the Cats gave UCLA everything they could handle. Porter was named tournament MVP and Villanova basketball was forever more thrust onto the college basketball national stage.

The NCAA later vacated Villanova’s runner-up status and Porter’s MVP award when it ruled him ineligible because he had signed a professional contract with the Pittsburgh Condors of the American Basketball Association during his senior year. In shame, Porter cut all contact with Villanova and his teammates for the next 25 years. He finally returned to Villanova’s campus in 1996 after years of prodding by 1971 teammate Ed Hastings to attend a ceremony at the Pavilion commemorating the championship game against UCLA. Porter was overcome by the warm reception he received from his teammates, the Villanova fans, coaches and players and once again became an vibrant part of the Villanova family. On the evening prior to Nova’s Elite Eight contest against Florida in the 2006 NCAA tournament, Porter regaled Randy Foye and his Wildcat teammates with stories about that 1971 Cinderella run over dinner at his Minneapolis home.

Tragically, Porter was taken from us in May 2007, after a fatal assault while working as a probation officer in Minneapolis. On June 5, 2007, St. Thomas of Villanova Church was filled with mourners that included his former teammates and members of Philadelphia's close-knit basketball community. Porter’s wife, Theresa, thanked the Villanova community and her husband's teammates for “welcoming Howard back home," during her eulogy. When she was finished, she received a three minute standing ovation. Jay Wright, who idolized Porter as a youngster, also delivered a eulogy highlighted by recollections of Porter hugging Villanova players in the locker room after their 2006 NCAA tournament loss to Florida. "That was Howard's gift – his grace, his humility and his big heart," Wright said. Porter's coffin, adorned by a large blue and white flower arrangement in the shape of a "V," was escorted from the church by his 1971 teammates.

Today’s Villanova students may have little appreciation for the player who wore the number 54 jersey that hangs today from rafters at the Pavilion. However, the fans who saw him play the last time Nova faced UCLA in the NCAA tournament know that The Geezer will be with us in spirit and looking forward to this, the day that Nova finally avenges its loss to UCLA in the 1971 championship game. Guest Contributor Ed '77