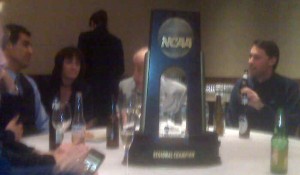 My daughter, Kait '08 and her boyfriend, Adam '08, missed the e-mail of a lifetime last night. Adam forgot to take his Blackberry to O'Malleys Bar & Tavern in Boston, where they watched Nova beat Pitt. After the game, Adam's boss, who is a good friend of Coach Wright, invited Adam and Kait to join Jay Wright, Rollie Massimino and the Wildcat team in a celebratory dinner. Sadly, Adam did not see the e-mail until this morning. He is still kicking himself. As a consolation prize, Adam did get a picture taken during the dinner, which he wanted to share with VUHoops.com's readers. Jay is sitting to the left, wife Patty center, and Rollie is barely visible behind the Eastern Regional Championship trophy.