On getting the coaching job at Villanova: I had never thought of it. Before I got here there had been four Villanova basketball coaches in 60 years, so it wasn't something I had thought of. Father Dobbin called me on a Saturday morning and we knew each other because I had been an assistant coach here. I was supposed to talk to Rutgers on Sunday morning. Father Dobbin called me on Saturday and offered me the job and I took it. It's Villanova. It was a no-brainer.

On wanting to get back to Villanova after being an assistant coach here: At the time I got this job I was a candidate at Massachusetts, Tennessee and Wisconsin. Nobody knew this at the time but the one I was most serious about was Rutgers. But this was Villanova. You never thought of it, but then it opens and it is offered to you and I took it. My wife went here and we knew everybody here. I was always back here. I came back to watch games and came to camp in the summer. If Steve Lappas was going to leave it was a no-brainer but I didn't expect him to leave.

On getting back to a full practice on Tuesday: I love all you guys and everything but we did talk to the guys about that. As soon as all of you leave we just love to be on the court together and talking basketball together and talking about getting better. The guys love that and the coaches love that on this team. Practice with this group is intense. It's fun and it is rewarding. 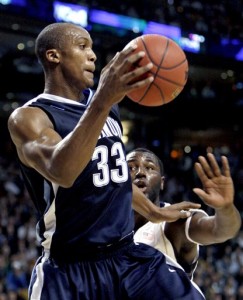 On his work ethic during the offseason: Me and Dwayne Anderson worked out together back in D.C. Some days one of us didn't want to go and the other one made you go. It has to start early in the morning so you can get everything in. It started with getting some cardio work early in the morning and going to a trainer for a little bit. Then we took some time off, got something to eat and then went to the gym to shoot a whole bunch of shots. I might shoot 600-700 shots or more in a day. I also did up and down ball handling, off the dribble moves and moving with the ball. After the workout I would either rest up or that night play pick-up games at a local place. The day started around 7 a.m. and at night it depended on how good the games got. Sometimes the games went until 11 or 12 at night depending on how good the games were.

On whether the motivation to work so hard came from wanting Villanova's team to get better: I just think that this is life and it's what you do if you want something for yourself. If I was an accountant I would stay with numbers and would look at different things, and see if I could make more money with the more numbers I figured out. I'm a basketball player so I stay with the ball and stay in the gym as much as I can. The gym is my office.

On the process of his development: It all kind of started to come together quickly. When I worked out it got to the point where making 600-700 shots in a day was getting easy and you start feeling good about that. That's like a medium day. A good workout can get you in the thousands. The first time you go for 1000 shots or go for 700 your arm gets tight on the last shots and you are missing by like two feet on the first day. After that you get better and start missing off the backboard and finally you get to where they all go in. 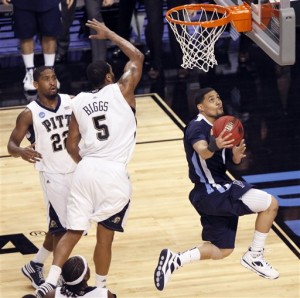 On whether he rooted for Oklahoma in the NCAA Tournament: Of course I want them to succeed. There are still guys there that I want to succeed and coaches that I want to see succeed. Media wise I don't know if I wanted them to win. Between the shot that I made and then if Oklahoma would have won, everyone would have wanted to talk about that. I didn't really want to go through that part. I just wanted both teams to succeed and North Carolina was the one that won.

On adjusting to being at Villanova: It probably took until halfway through my sophomore year. It was a very hard adjustment and I think the coaches and players here will tell you that. I felt like I had everything set and then it took a turn. A lot of people had been around me but then it was just my family and friends that stayed true to me. The second time around I didn't want to go too far. I wanted to stay close to home and reward the people who were close to me when I was younger.

On considering local schools to where he grew up: I considered Maryland and considered Virginia and Georgetown. Georgetown is the team I always liked growing up. They were my team. After the game last week being interviewed by John Thompson was like the best thing in the world for me. I respect him so much for what he did with that program and he is someone I look up to. I respect what Coach Thompson is doing at Georgetown now too. I think they will be a program I always look at.