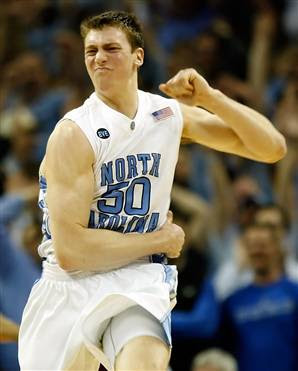 In another VUHoops exclusive, Coach Jay Wright offered us a quick glance at his NCAA Tournament "To Do" list before boarding the team bus for Detroit. While the Coach has been busy knocking items off his list, there is still a bit of business unfinished for his Wildcats:

ý Get past the dangerous opening round against American

ý Avenge loss to UCLA in the 1971 NCAA Finals

ý Beat Duke for the first time since 1958

¨ Avenge 67-66 loss to North Carolina in the Sweet 16 Round of the 2005 NCAAs on the controversial traveling call against Allan Ray.

As the #1 seed in the South, North Carolina has had a fairly easy road to the Final Four, beating #16 Radford (+43), #8 LSU (+14), #4 Gonzaga (+21), and #2 Oklahoma (+12). Nova has had more of an uphill battle, playing the role of the underdog in its last two games against #2 Duke (+23) and #1 Pitt (+2). All of the experts pick North Carolina to win, but with the way we have played in this tournament, North Carolina certainly should not looking past Nova, a veteran team that is playing a hard-nosed fearless brand of Big East basketball. They are a team on a mission that does not end until Monday night.

Here are the individual match-ups:

Hansbrough, AP First Team All America, is very strong and uses his strength to create space and draw contact on the block. He is a fundamentally sound hustle player with a well developed post game and plays effectively with his back to the basket. There may be no player in the country better at finishing with contact. His post play generates a tremendous number of trips to the foul line, where he shoots 87%. Hansbrough does force the issue sometimes, attempting poor shots rather than kicking to an open teammate. This tends to happen against bigger or more athletic frontcourts. His jump shot, though awkward, has proven to be relatively effective if he is given room to get it off. Hansbrough still struggles, though, with his ball handling skills. He can only attack the basket in a straight line.  Hansbrough’s hard-nosed style of play translates well to the defensive side of the ball. He is tough to back down and rarely leaves his feet on ball fakes. He is an excellent rebounder who relies on tenacity and positioning rather than jumping ability. However, he struggles to stay in front of more athletic big men.

Lawson, AP Second Team All America is clearly one of the best point guards in the country. On the offensive end, Lawson is playing the best basketball of his career, and his improved his three-point shooting, hitting 49%. However, his mid-range game is still highly suspect, attempting very few shots from inside the arc that aren’t lay-ups and showing little effectiveness with pull-up shots or floaters. Attacking the basket, he makes excellent use of hesitation and in-and-out dribbles in combination with his footwork and body control, getting into the lane with ease. Lawson has been exceptional as a floor general, with 6.5 assists per game and a 4.87 assist to turnover ratio. He has great court vision and is able to find open shooters and cutters across the court, while taking advantage of the respect opponents give him on drives, making a lot of quick drive-and-kicks. Defensively, Lawson is a huge disruptive force on the weak-side (2.0 steals per game), and capable of being a highly effective man-to-man defender.  However, his size is a disadvantage defensively.

Ellington’s stats: PPG 15.6., APG 2.7, FG% 48%, 3P% 40%, RPG 4.8, BPG 0.2, SPG 1.0
The former Episcopal Academy star was good enough to be projected as a first round NBA draft choice after his sophomore season but he ultimately decided to return his junior season. Already Carolina’s best defender, he is one of the team’s best rebounders from the guard position. He is highly skilled and a great scorer who gets a lot of rise on his jump shot and can shoot over most defenders.

Small Forward: Dwayne Anderson (6’6”, 215 lb, SR) vs. Danny Green (6’6”, 210 lbs, SR)
Green’s Stats: PPG 13.3., APG 2.8, FG% 47%, 3P% 42%, RPG 4.8, BPG 1.3, SPG 1.8
NBA scouts are drooling over the Danny Green Green due to his excellent decision making, improved ball-handling and defensive presence. Green’s length will give Dwayne Anderson much to deal with around the rim. Green’s 3-point shooting gives him the ability to stretch the defense, and open things up for Hansbrough. He doesn’t hesitate to launch transition jumpers or to take a shot in rhythm with a hand in his face. Green has shown the ability to take over games.

Deon Thompson is a solid rebounder at 5.8 RPG and gives the Tar Heels another down low scoring presence. He also has shown the ability to hit the 15 foot jumper. However, Thompson has a tendency to disappear in the offense with poor shot selection.

Bench: Against Oklahoma in the Elite 8 Game, North Carolina gave significant minutes to only two non-starters – Bobby Frasor, a guard, who scored only 2.7 PPG during the season, and Ed Davis a 6-10” freshman forward who averaged 6.6 PPG, 6.6 RPG and 1.8 BPG.  For Villanova, Corey Fisher provides scoring (10.8 points per game) and ball distribution (2.8 assists) in addition to shooting, perimeter defense (1.3 steals), and the ability to put in a lot of quality minutes when someone needs a rest or gets into foul trouble. Corey Stokes contributes scoring (9.8 points), shooting, and rebounding (3.5 boards). Antonio Pena could see significant minutes against North Carolina’s big frontcourts.

Ed’s Analysis: While all the experts are already looking forward to a Connecticut vs. North Carolina final, here’s why Villanova, not Carolina, will be playing in the final game of the season for the first time since 1985:

2.  They’re Human:  Early in the season, the experts were saying that “There is North Carolina, and then there is everyone else.”  However, on January 14, Boston College showed us that North Carolina is indeed human, winning by 7 points at North Carolina.  They did it with a very physical defense and an unwavering focus, something that Villanova fans have seen a lot from our Cats this season. Also, BC gave Hansbrough little space to operate, often double-teaming him.  North Carolina gave us several other glimpses into their vulnerability, losing to other mere-mortal teams on January 11 to Wake Forest (-3), on February 21 to Maryland (-3) and on March 14 to Florida State (-3).

3. Confidence: While North Carolina has won as many games as Nova in the tournament, Villanova is playing with a great deal of confidence gained by getting better in every game and never backing down from opponents with superior talent. We have yet to see Reynolds, Fisher and Dante to play up to their potential in the same game; that will change in this game.

6. Home Court Advantage: Neither team has it, but Nova played in this cavernous arena in last year's Sweet 16 match against Kansas.

7. Pressure: No one expects Villanova to win; the pressure is all on Carolina

This will be a battle and a close game, but I have my money on Nova in this one.