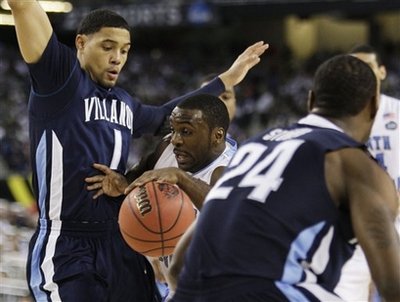 Villanova had it's run in the NCAA tourney ended tonight by North Carolina in the National Semifinal. The largest crowd in NCAA Final Four history watched Michigan State defeat Connecticut and then UNC beat the Wildcats 83-69.

In a game where Villanova made more Field Goals and outrebounded UNC; the Tar Heels got their 14 point edge from two lines; the Free Throw and 3-Point.