Share All sharing options for: Mouph & Dom Play This Weekend 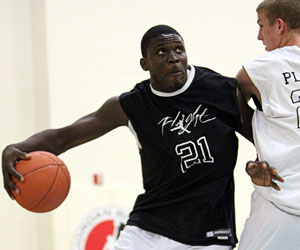 Future Villanovans Mouphtaou Yarou and Dominic Cheek will be playing in the Jordan Brand All-American Game tomorrow. It will be the first time that the two future Wildcats will be meeting after talking on the phone earlier in the week. Check out this SNY.tv article on the duo as the get ready for Saturday's game.

Even though, the four incoming freshman have accumulated tons of honors, they recognize what it means to play basketball for Jay Wright:

"My role going in next year is just to come in and try to fit in with the team," said Cheek, who signed his letter of intent on Wednesday. "Nobody is guaranteed a spot, so we just got to go in and try to work harder."

That game will be held at Madison Square Garden tomorrow (Apr18). It will be aired on ESPN2. Tipoff is at 8p ET. If you want to go to the game, tickets start at $10.