'Nova Pros: Around the World

Share All sharing options for: 'Nova Pros: Around the World

In case you didn't realize, the NBA Playoffs started. The season is continuing for two former 'Nova stars. 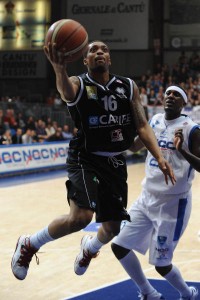 A. Ray with BC Ferrera

Kyle Lowry and the 5 seed Houston Rockets are taking on the Portland Trailblazers. Lowry had 2 points on 1-2 shooting, 4 rebounds, and an assist in their Game 1 win.

Tim Thomas and the #7 Chicago Bulls took Game 1 from the Boston Celtics. Thomas had 3 points and 2 rebounds in 5 minutes of action.

Allan Ray is playing for Basket Club Ferrara in the Italian Serie A. The squad is in 9th place in the 16-team General Classification. He is averaging 16 points and 5 rebounds.

There are some great videos of A-Ray on YouTube... thanks RFC

Brian Lynch is playing in the Belgian First Division for Antwerp Diamond Giants and scoring about 6.6 a game.

Rafal Bigus is PBG Poznan in Poland and 7.2 points and 6.2 rebounds a contest.

Gary Buchanan is leading Gimnasia Esgrima Comodoro Rivadavia in the Argentinian Liga A with 13.2 points a game and 4 rebounds.

Chris Charles is playing in Syria with Jalaa Sporting Club. 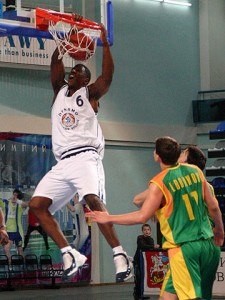 Chuck Kornegay is in Russia with Dynamo Moscow Region. He is averaging10.1 points and 6 rebounds a game. His stats are ranked in the league's Top 20 in FG%, Rebounds, and Fouls.

Mike Nardi is playing for Scavolini Spar Pesaro in the Italian Lega A.

Curtis Sumpter is playing in the French Pro-A league with Chorale de Roanne. He is scoring 11 points and pulling down 6 boards for the French Squad.

Howard Brown is playing with Aguas de Valencia in Spain. He is averaging 10.6 points a game.

Andrew Sullivan is in Russia too. He plays for CSKA Samara and is averaging 5.5 rebounds and 11 points a game.

It's quite possible that there are others out there, but these were the players who we were able to actually confirm. Enjoy!

Thanks to the extra help from Spain Fan!