The Next Wildcat Commitment?

Share All sharing options for: The Next Wildcat Commitment? 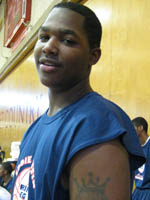 Markus Kennedy to Make Decision on the 29th (by Scout)

Adam Zagoria is noting that 2010 recruit Markus Kennedy will be making an announcement for his college decision on Wednesday.

As we noted two weeks ago, the 6'9" Philly Native was on campus yesterday. He will make his decision between Villanova and West Virginia.

Kennedy is rated #131 by Rivals, is given 3-Stars by Scout, and is #54 according to HoopScoop.