Share All sharing options for: Rest Easy, Jay isn't headed to the Sixers

There had been some slight internal concerns that Villanova head coach Jay Wright was entertaining the idea of leaving the program to try his hand in the NBA with the Sixers in South Philly. He is not. 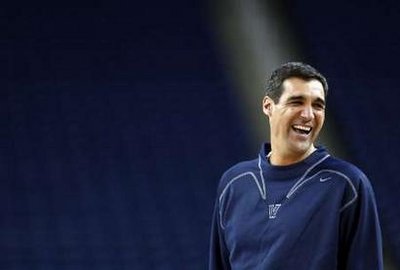 Plain and simple, he is not interested. This was noted earlier this morning on Philly.com and has just been validated by an official release from campus.

Jay met with Sixers general manager Ed Stefanski last week. Following the candid conversation, Wright called "Ed to thank him and requested that he remove me from consideration. I love Villanova and it is where I want to be. I am grateful to the Sixers for including me in the process."

So far, there have been unofficial whispers that Jay has been contacted to be the head boss at Indiana, Kentucky, and now his favorite pro team growing up, the Philadelphia 76ers. Yet he has remained at 'Nova.