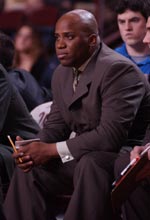 Well... it was the next step in the line of dominoes to fall. According to the Albuquerque Journal, University of New Mexico Assistant Coach and 'Nova graduate, Chris Walker, is leaving UNM.

New Mexico head coach Steve Alford said, "Chris is a great coach and a friend, and was a tremendous asset to Lobo basketball. We wish him all the best."

Walker just finished his first year of a 3-year contract with the Lobos.

Nothing has been announced officially from the Main Line, but with the new fiscal year starting on June 1st, a release naming Walker should be imminent.

As we mentioned almost three weeks ago, Walker graduated from ‘Nova in 1992 and has spent the past two seasons as an assistant coach at the University of New Mexico under Steve Alford.

While at Villanova, Walker started 96 games and was named to the All Big-5 team twice. As a Wildcat, he participated in two NCAA Tournaments and two NIT trips. His 404 Assists at ‘Nova rank him 13th All-Time. He is also 8th in Career Steals with 185.