But after watching the point guard from Philly's Roman Catholic at the Villanova Team Camp, Wright extended an offer to Wayns. Shortly after, Maalik gave the first verbal for Jay Wright from the high school Class of '09 when he committed at the end of that month.

Throw in the fact that he is an excellent rebounder for his size and his future is very bright.

Maalik is a complete point guard who doesn't amaze anyone with a single aspect of his game. One scout noted, "He’s a true point guard with a real distributor’s mentality, looking highly unselfish and clearly looking to make others around him better. He’s a strong ball-handler as well, aggressive making moves to the basket, mostly using his smarts and craftiness, but not looking overly athletic at the same time."

From all accounts Wayns is down-to-earth kid who is already bleeding Villanova Basketball. He was already buying into Jay Wright's system of hustle, team play, and defense before leaving High School.

This was evident off the court. Wayns was routinely seen at The Pavilion sporting 'Nova gear. He also visibly encouraged fellow Wildcat newcomer Dominic Cheek in heading to the Main Line when both were on the US U18 Team that competed in the FIBA Americas Tournament in the Summer of '08. 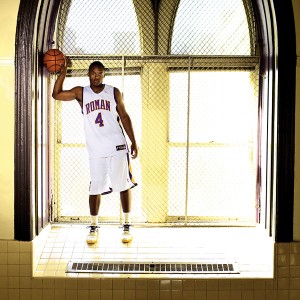 Maalik officially signed on the line to attend Villanova and become a Wildcat on November 12th- the first day of the Letter of Intent signing period.

Wayns finished his high school career with 1,151 points and ranked #26 by Rivals and Scout and #23 by ESPN.

Painting the complete picture of Maalik... he has had some knee injuries in his high school career. He also need to gain more consistency with his jump shot.

He will be a point guard at 'Nova and should see some time on the court as a freshman behind Scottie Reynolds and Corey Fisher.

He is definitely proud to be a part of "Guard U" and there's no doubt his play on the court will increase the profile of that name.