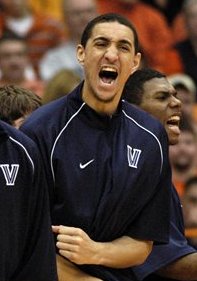 Redshirt Freshman Maurice Sutton comes into the 2009-10 as possibly the least heralded newcomer to the Wildcat Roster; but with that comes the largest opportunity to shine and grow.

The 6'11" Center from Upper Marboro, MD sat out last year in a decision to help his career at Villanova. The 2008-09 season gave Mo an extra year in Jay Wright's system to learn and understand the complicated schemes as well as a year for Sutton to put some bulk on his frame.

Sutton adds incredible length and athleticism for the Wildcats. He knows he will be a role player to start and that his performance will determine his success. Mo has also bought in to the Villanova Basketball Family- he was one of the most energetic people on the sidelines during 'Nova's Final Four run in 2009.

The knock against Mo is his bulk. Maurice will be able to fill in spot time for the Wildcats in the present. However, the future will be very promising if his frame adds some bulk which will be needed down low in the rough Big East Conference.

He announced his decision to become a Wildcat on May 21, 2008 selecting 'Nova over Kentucky, Seton Hall, and Indiana.