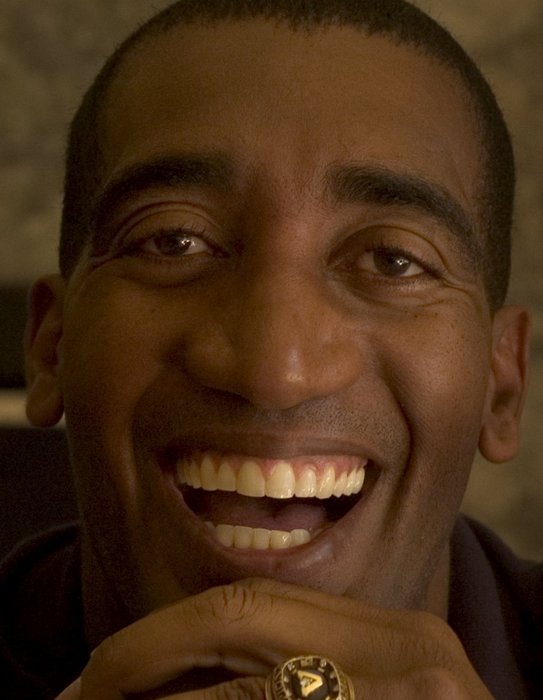 Perhaps Mike at VUHoops shines the brightest this time of year by providing a near-daily fix for Nova basketball fanatics struggling through the news-barren months of May through October. Trying to help Mike where I can, this morning I stumbled upon a two-month old story about Harold Pressley ’86 written by Joe Davidson of the Sacramento Bee. I would imagine most of us missed it during the euphoria of the Cat’s Final Four run, but it was worth the read (and check out Harold's ring in the picture).

"Everywhere he goes, he is greeted with a look of recognition. The long, lanky frame. The warm smile. And the queries, either in Sacramento – home since he was a first-round pick of the Kings in 1986 – or across the land: "Say, you sure look a lot like Harold Pressley," or "Aren't you the guy who scored baseline against Patrick Ewing in that championship game way back when?"

And fame never gets old. Twenty-four years later, a day doesn't go by that someone – a stranger, a friend – isn't regaling in Pressley's NCAA championship moment, his role in history for the 1984-85 Villanova team that pulled off what is still regarded as the greatest NCAA championship upset.

If Magic and Bird brought star status and television recognition to the NCAA Tournament 30 years ago with their epic showdown, Villanova's conquest of Georgetown on April Fools' Day 1985 in Lexington, Ky., officially put the Madness into March. With Villanova back in the Final Four today for the first time since '85, Wildcat fever has bridged the generation gap. The only difference now is no one would be terribly surprised if the Wildcats won it this time.

The former Kings forward said 'Nova '85 still affects him because of the magnitude of the upset.” I’m Harold Pressley because of it, and I milked it for 24 years, and I'll milk it 24 more," he said amid laughter before turning serious. "The economy hasn't been too good to me recently. I had to let my car dealership go in 2008. And I had major back surgery in September, spent a lot of time in bed with a lot of pain. But doing better. And this time of year? Love it."

Said Villanova coach Rollie Massimino, now coaching Northwood, a National Association of Intercollegiate Athletics Division II school in West Palm Beach, Fla.: "It was a special time, a great team. I love those guys, all of them – Harold, Ed. "Pressley keeps in contact with his former teammates and his old coach. This week [2009 Final Four], everyone is calling each other.

This includes Gary McLain, who tarnished the title years later when he sold a 17-page piece to Sports Illustrated detailing his drug use in college, including being high on cocaine during the Final Four and when the team visited the White House. It took Pressley 15 years to talk to McLain. They have since become close. "I had Gary come to Sacramento a few years ago, and he spoke to groups about what he'd gone through," Pressley said. "We're all patched up.""