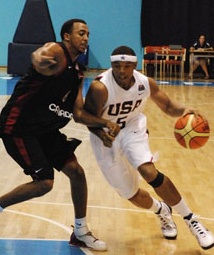 USABasketball.com reports that Corey Fisher scored 11 points and Da'Sean Butler of West Virginia scored a team-high 20 points to lead the 2009 USA Men's World University Games Team (1-0) to a come-from-behind victory over Canada (0-1) 85-81 in the 2009 Serbia International Invitational on Saturday night in Belgrade. The U.S., which trailed by as many as 16 points in the first half and utilized a 28-14 fourth-quarter surge to clinch the win. Marquette’s Lazar Hayward scored 10 points.
Staring down a 10-point, 67-57 hole with one quarter to go, Fisher fed Thompson for two points to kick-start the USA's comeback. With game minutes spread over twelve players, Fisher played 16 minutes and was 5-9 from the field, had one rebound, two assists, two turnovers and three steals.
The U.S. continues the pre-World University Games tournament against Serbia on Sunday, June 28 (3:00 p.m. EDT), following the Canada – Russia contest (12:30 p.m. EDT). The United States is set to open World University Games play on July 3 against Finland (2:00 p.m. EDT) and faces South Korea on July 4 (2:00 p.m.). Second round action is scheduled for July 6-7, quarterfinals will be played July 9 and medal semifinals are slated for July 10. The gold medal will be contested on July 11 (3:00 p.m. EDT).
Fisher was interviewed after the game. Click "more" to read the Q&A:

Was there any worry in the first half when you were down by double digits?
Not at all. It's our first game. We are coming together, no matter good or bad things. Now we got a feel for each other. Everybody comes out slow sometimes - you just have to finish the game.
What did you think about the USA defense in your first game?
We've got a lot of work to do. You never stop doing work on defense. We came out today, and we won the ball game. It was a good game, and you have to give Canada credit. Tomorrow we are back at it, and we just have to play hard and compete.
You watched tomorrow's opponent, Serbia, play Russia tonight. What do you expect to see tomorrow?
It's going to be an intense game. They are going to bring it, and we are going to bring it.
What was the difference for the USA to start the fourth quarter?
Everybody just said don't worry about our offense, and we came together on defense and that's what we did. We forced turnovers, and we had steals that turned into points. That's how we won the ball game.