Share All sharing options for: USA Falls To Serbia 98-82 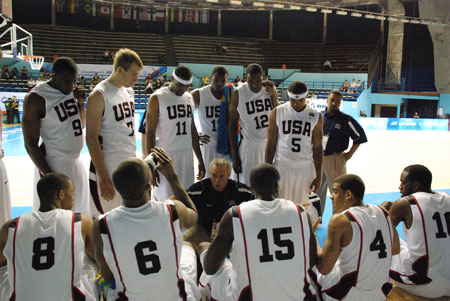 USABasketball.com reports that despite receiving double-digit scoring efforts from four players, the 2009 USA Men’s World University Games Team (1-1) was defeated 98-82 by host Serbia (2-0) on Sunday in the 2009 Serbia International Invitational on Sunday night in Belgrade. Serbia also defeated Russia in the first round. Corey Fisher scored 12 points in 19 minutes of action on 4-12 shooting from the field and 4-4 from the free throw line. Fisher also had one assist but no rebounds or steals
"Serbia came out and played hard," said Fisher. Serbia struck first and jumped to a 13-6 lead in the opening minutes. However, Fisher scored a 5-0 run for the USA to pull the team back to within two points, 13-11. From there the quarter remained close, and with less than a minute remaining in the period the score was knotted at 24-24.

The round-robin Serbia International Invitational concludes on Monday, June 29 with the USA taking on Russia (12:30 p.m. EDT) and Serbia against Canada (3:00 p.m. EDT).

Corey was interviewed after the game.  Here's the Q&A:

What were your thoughts on tonight's game?  Serbia came out and played hard. We came out and played hard. We came up short. This is an exhibition game just to get us ready for when the real thing happens this week. We can't look back. We have to look forward and just come together as one. Everybody loses. You have to win and lose. We are going to come back tomorrow and just keep working hard and just go out there and compete.

Did the full-court pressure in the third quarter affect your execution?
Not at all. The full court pressure wasn't anything we haven't seen before. One key thing was that they got to the line a lot. They shot 46 free throws. We settled for jump shots, and we didn't get into the lane. We just have to do a better job of attacking.