Share All sharing options for: Fisher Shines In USA Victory Over Russia 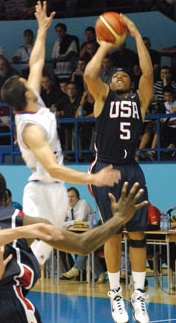 USABasketball.com reports that Corey Fisher continues to shine on the international stage, leading the USA Men’s team (2-1), in a 67-63 hard-fought defensive battle over Russia (1-2) in the 2009 Serbia International Invitational on Monday night in Belgrade. The US opens World University Games play on July 3 against Finland. The gold medal game will be played on July 11.

Fisher led Team USA in scoring (15 points; 5-11 FG; 2-4 3PT), steals (3), and minutes played (28) and had two rebounds and no assists. "The guys got it done tonight with hustle opportunities," said USA and University of Wisconsin head coach Bo Ryan. Corey (Fisher) and Talor Battle were everywhere. I just really like the way they stuck their noses in there." "Our team defense got better," said Fisher, who also had three steals. "We came out with a lot of energy. That is one thing we talked about in the locker room before the game – to come out with toughness and play for each other."
Corey was interviewed after the game.

Corey, was there ever any doubt in the fourth quarter that you would be able to knock down your free throws?
Not at all. You have to give credit to Russia. They played hard. We played hard. We work on free throws every day in practice, and it's just something that you have to do to win ball games down the stretch.

How important was this win tonight heading into the actual tournament this week?
It was real important. First of all we got the win. But it doesn't matter if we win or lose, we are just trying to come out here and compete and get ready for the real competition. It's helping us get better. No matter if it's a win or a loss, you always can learn from it. This is something that we learned from tonight with the win.