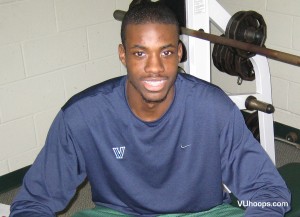 In the 4th installment of this Summer Series, we look at the 2nd player from the Class of '09 to give a verbal commit to Jay Wright, Isaiah Armwood.

The 6'8" forward from Maryland came on to the scene during his sophomore year at Montrose Christian in Rockville, MD. In the summer of 2007 he became a known quantity in the recruiting world due to an immense upside based on his athletic ability.

During his junior season at Montrose, he battled a knee injury that has since corrected and healed itself. 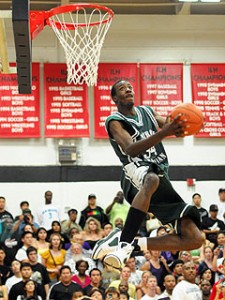 At Villanova, Armwood will need to bulk up and focus on some academic issues, but in time will play the 4 in Jay Wright's brand of basketball. His athleticism is quick to see watching the agile player on the floor. Through the High School tournament circuit, Armwood was always able to provide showtime and entertainment with his high-flying dunks- one of which was ESPN's Play of the Day back in April.

Finishing up his high school career, Armwood was selected to participate in the Senior Showcase in Orlando and the Reebok All-America Game. He was rated $61 by Rivals and #81 by Scout in their final rankings for the Class of 2009

Isaiah selected Villanova over Georgetown, Syracuse, Ohio State, and Texas. He gave his verbal to become a Wildcat on July 1, 2008 and signed his National Letter of Intent in the November signing period.