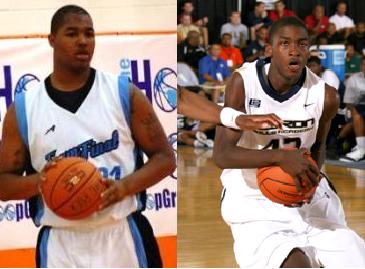 Keith Pompey of the Philadelphia Inquirer mentions Villanova recruits Michael Gilcrist (’11) and Markus Kennedy (’10) in his article, "Less than All-Star Turn for Reebok Camp." The article reports how top recruits, including Gilchrist and Kennedy, are passing on the Reebok camp in favor of the Nike LeBron James Skills Academy, which features the top 80 high school players in the country and is hosted by "King" James. Mr. Pompey goes on to make some interesting remarks on Messrs. Gilchrist and Kennedy.

Mr. Pompey says, "Delaware County’s Markus Kennedy, didn’t show up [at the Reebok Camp] after committing. Kennedy, who is a Team Final teammate of Gilchrist’s on Team Final, Delaware County’s AAU team, is regarded as a top 100 player in the class by most recruiting analysts. Kennedy, who opted to go to the LeBron James event instead, was listed in the Reebok media guide and said he notified Reebok of his decision weeks ago. "It’s nothing against Reebok or anything," said Kennedy, who plans to attend Winchendon School (Mass.) in the fall. "It’s just that Nike brought in the better players. I went where I knew I would get better and play against the best." Kennedy said that playing for a Nike AAU team and having committed to Villanova, which is a Nike school, did not factor into his decision to attend the Nike camp.

Mr. Pompey goes on to say that Michael Gilchrist, who plays for Delaware County’s Team Final, also chose to attend Nike’s LeBron camp. Gilchrist is regarded as the nation’s top college prospect, regardless of class.