Share All sharing options for: Pena Adds to Villanova Folklore? 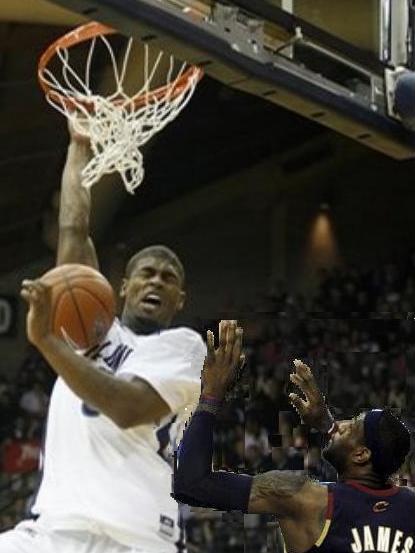 Well, last March Scotty Reynolds brought us "The Shot." Is it possible that Antonio Pena added to Villanova folklore by bringing us ‘The Dunk"?

In his article, "Make Me Stop," Nick Counts, Tribune Sports Editor, reported that "LeBron James was playing a pick up game with some college kids last week and was dunked on by an unidentified sophomore who plays basketball for Villanova University. While this may seem an unlikely turn of events, only the people who were present in the gym that day will get to see it. Immediately after "the dunk," an embarrassed James noticed that two reporters recorded the play on their camcorders. He instructed a rep from Nike, who was in attendance, to confiscate the video tapes. If James had simply laughed it off and let the reporters keep their tapes, the oddity would have dismissed as a kid getting "lucky" by dunking on him.

Instead the dunk will embellished to the point that it becomes [folk lore], as if the [Villanova] kid flew through the air, did a somersault over LeBron, and dunked the basketball hard enough to shatter the windows in the gym.”

As much fun as it might be to speculate whether Pena indeed carried out the immortal deed, it turns out that Mr. Counts did not quite have his facts right. With apologies to Antonio, ESPN reports that it was actually a sophomore from Xavier, not Villanova, who exposed very human flaws in the man who would be our King. Jordan Crawford, a 6′4″ guard who averaged 9.7 points for the Indiana as a freshman and sat out last season as a transfer, threw down a vicious two-handed dunk over 6′8″ King James during a pick-up game at Nike’s LeBron James Skills Academy camp last week. James, who earned $15 million last season, might want to use some of that money to purchase a few lessons in humility.