Share All sharing options for: More to Life: Nova Grad Behind Watson's Miraculous Near-Win At Turnberry 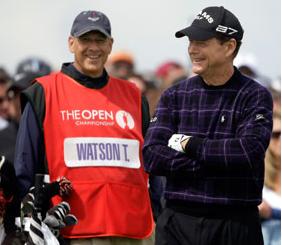 An article written by Michael Matza, Inquirer Staff Writer, features Philadelphia political consultant Neil Oxman, a Villanova graduate who also caddies for Tom Watson. Watson, 59, nearly won the British Open, losing in a four hole sudden death playoff against Stuart Cink. Matza reports that "’the Ox’ has caddied for Tom Watson since 2003, being "on the bag" for the highly respected former champion's return to glory is a supreme honor.

Oxman, 59. a bearishman whose caddy's cap covers thinning brown hair, basked at the edge of limelight at the British Open in Turnberry, Scotland, this week after Watson set the course ablaze with a first-round, 5-under-par 65.

The London Times added its own colorful description of Oxman as "balding, bespectacled, overweight and known for his crumpled dress - including wrinkled, un-ironed shirts - Oxman resembles what he very nearly is: a dotty Harvard professor with his mind on higher things. He and Watson make for quite a pair as they amble down the fairway."

"This is a gigantic story,” said Oxman. "[Tom has] played wonderfully." Oxman has known Watson since 1972, when Watson was in his first full year on the Professional Golf Association tour, and Oxman was caddying to pay his way through the Duquesne University law school. He attended Villanova University as an undergraduate. From 2003 on, Oxman has led a dual life, maintaining his political work and taking time off to accompany Watson at international tournaments."