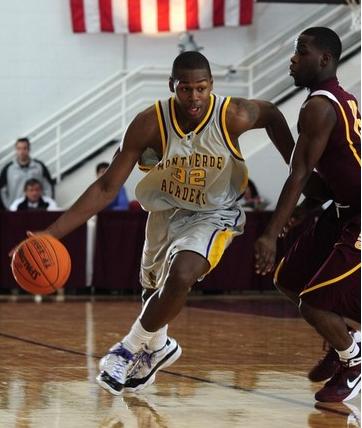 Sean Keeler of the Des Moines Register wrote a follow-up article on "The Dunk" over NBA star, LeBron James, by Jordan Crawford of Xavier University during the recent Nike-sponsored LJ Skills Academy. Mr. Keeler interviewed Harrison Barnes (6’8" 209 lbs), one of the witnesses to "the dunk" and the #1 ranked shooting guard in the Class of 2010. According to Barnes, "LeBron should have been a better sport and just let it [go]. Everyone gets dunked on. It’s not a big deal." Apparently that applies even to young Mr. Barnes. When asked if he was ever dunked on, he replied, chuckling, "Only once that I can remember. It was James Bell, who’s going to Villanova."...

ESPN recently posted an updated assessment of James Bell ‘10, the 6’6” 217 lbs small forward they rank #34 overall and #8 at his position who committed to Villanova last year. A summary of their assessment is detailed on the next page.
In the words of ESPN, “Bell is a great transition finisher and an explosive athlete. He has great size and strength as he attacks the rim with power. He is charge prone at times because his mid range game must continue to improve. Bell has shown signs at times to be an improved three point shooter but he must continue to get repetitions because he is an average shooter at best mainly because of his lack of shot preparation. In addition to transition his points come on drives in the lane where he can score through contact with ease. He is a good ball handler and has the ability to penetrate and kick to open teammates. Bell does a good job at drawing fouls with his aggressive style of play. He has a great motor and plays with excellent pace. He is a capable defender because of his terrific athletic ability and will be a treat to watch in the Wildcats transition game.”