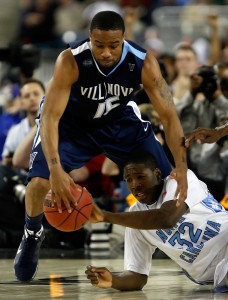 Given the possible implications of the unsettling news reported yesterday by VUHoops, we thought we would change our planned Wisdom of Crowds lineup and shift our focus to Reggie Redding. Until yesterday, many VUHoops readers had commented that Reggie might get more minutes next season than any other player given his stellar defense, size, continued growth and ability to play the 1 - 4 positions.

His arrest yesterday on marijuana charges introduces the possibility, hopefully remote, that he may not see a minute of play next season. If there was ever a need for the Wisdom of Crowds, it is now. Use the voting buttons in the right margin of the VUHoops home page to predict the number of minutes per game that you think Reggie will play next season, and the comment section if you want to explain your thought process. To help you come up with your guess, we have provided below Reggie’s minutes per game and other stats from last year as well as his player assessment. Next week, we will finish off on the point guards by teeing up Maalik Wayns.

Bleacher Report: “Redding is a team-first player who will sacrifice a good shot of his own for a better one by a teammate. He ranks second on Villanova in assists per game and fourth in rebounds per game. He also almost never turns the ball over, averaging only 1.9 turnovers per game. Additionally, Redding is an excellent defender, notching an average of 1.1 steals per game. Lately, Reggie makes great choices with the ball and has become an important part of the Cat’s attack at both ends of the court.”