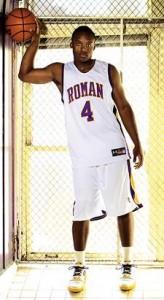 Refocusing our Wisdom of Crowds series back on Nova point guards, next up is 2009 recruit, Maalik Wayns. Use the voting buttons in the right margin of the VUHoops home page to predict the number of minutes you think Maalik will play, and the comment section if you want to explain your thought process. To help you come up with your guess, we have provided an assessment of Maalik below.

ESPN Assessment: Ranked #24 player overall and the #3 PG. Wayns plays the way that a point guard should play, looking to get his teammates involved as well as leading the defensive charge for his mates. He has very good quickness and handles the ball as if connected to his hand. Wayns places a great deal of pressure on opposing defenses by getting into the paint. Off of his penetration, Wayns gets the ball to his teammates in places where they can score easily. He also has the strength and muscle to take contact at the rim, adjust in the air, and finish at the rim.

He plays the game at one speed and that sometimes gets him into trouble. If he learns to change speeds with his good quickness, he will become almost unstoppable off the bounce. Wayns will have to improve his jump shot range and consistency as he kicks his leg out on the shot, which causes him to lean away from the rim and his prevents his shoulders from squaring to the rim, ultimately affecting his jumper in a negative manner. Wayns also defends the ball very well and rebounds in traffic with a great amount of effectiveness, especially given his size.