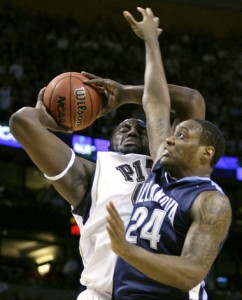 Continuing our Wisdom of Crowds series on Nova shooting guards, we now shift our focus to Corey Stokes.

Use the voting buttons in the right margin of the VUHoops home page to predict the number of minutes you think Corey will play, and the comment section if you want to explain your thought process. To help you come up with your guess, we have provided below Corey’s minutes per game and other stats from last year as well as his player assessment on the next page.