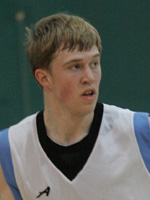 John Talty of TurtleSportsReport.com gave an update recently on 2011 prospect Trevor Cooney. The 6’3", 185 lb. Cooney, who plays for Sanford School in Delaware, is rated the #9 shooting guard in his class by Scout.com. ESPN ranks Cooney #23 in his class and the 7th best shooting guard. Dispelling the notion suggested in the title of the 1992 Woody Harrelson basketball comedy film, Cooney's highlight reel reveals that in addition to a sweet outside jumper, he's got some hops!

Cooney says "Villanova, Syracuse, Rutgers, and Ohio State have offered scholarships and currently are recruiting him the hardest. He has visited all of the schools except Ohio State." "It has been rumored for quite awhile now that Cooney will likely stay on the East Coast, but that is not set in stone at this point. For him, the most important factors in his decision are the coaching staff and the players the school is bringing in. A few schools already seem to have a bit of an edge at this point."

“I’m really close to the staff at Villanova as well as Syracuse, Delaware, and Rutgers,” he said. Cooney, who says his strength is his basketball IQ, is quite aware of which schools are nabbing the top prospects. One school, known for its’ ability to develop guards, has garnered the notice of Cooney. “It definitely shows what they can do with the players they bring in and develop,” Cooney said about the Villanova Wildcats. A lot can still change at this point though, as he admits that he likely won’t make a decision until his senior year. "

Scout.com analyst Evan Daniels says, “When he’s knocking down long range shots, which is what he’s known for, he can have a major factor on the game. [H]e’s a spot up guy that will mix a few off the dribble jumpers. [H]is confidence going off the dribble has improved and his mid-range game is starting to come around. Says ESPN, "Cooney's shooting ability is what draws your attention to this rising junior. He has consistently shown himself to be one of the top marksmen in the 2011 Class. He shoots it with ultimate confidence with the ability to get on an impressive roll. His deep range automatically stretches the defense opening up driving lanes for his teammates. Cooney does a great job of working off of the ball; he does a good job of setting up his defender and then utilizing and reading screens; he understands how to use spacing for catch and shoot opportunities. He has a nice shot fake that allows him to lift his defender and get by to the rim or pull-up for a mid-range jumper. He is a tough, rangy athlete that has decent lateral quickness and can guard his position. He is a good off the ball defender and showed a good understanding of help-side positioning.

Talty writes "Cooney has been quite busy this summer, competing in Nike’s LeBron James camp and leading his AAU team to the championship game in the Nike Peach Jam tournament."