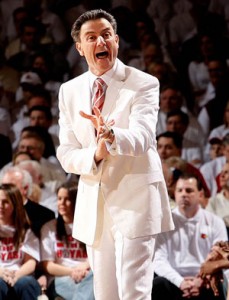 Pitino is sorry and going to stay. ESPN.com reports that Rick Pittino says "he will coach at Louisville "as long as they'll have me," after apologizing on Wednesday for "an indiscretion" he committed six years ago. Pitino did not directly address reports that he admitted that he had consensual sex with the woman charged with trying to extort him and then paid her $3,000. But he did say that "the past seven months have been very difficult on the people I love."

NCAA Proposes Hoops Summer School: Associate Press reports that "The NCAA's Board of Directors is evaluating a proposal that would require incoming freshmen men's basketball players in need of academic help to take six credit hours in summer school. The player would have to pass three hours to be able to play. The Basketball Academic Enhancement Group also recommended allowing players who take summer classes to participate in eight hours per week of athletic activities."