Pinkston Made Unofficial Visit to Nova

Share All sharing options for: Pinkston Made Unofficial Visit to Nova 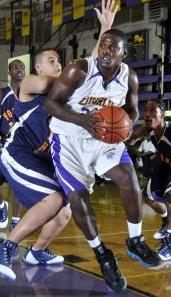 Dick Weiss of the New York Daily News reports that Class of 2010 prospect, Jayvaughn Pinkston Bishop, a 6-5, 220 lb power forward from Loughlin Memorial High School visited Villanova last Thursday and spent the weekend visiting Tennessee. Pinkston said his visit with Jay Wright and his staff went well, and added that Tennessee Coach Bruce Pearl was "a good dude. I like him a lot." Both visits were unofficial. He is also being recruited by St. John's, Marquette, Arizona, Seton Hall, Rutgers and Miami. Pinkston will likely take all five of his official visits in the spring and will be visiting Marquette later this summer. He has no immediate plans to announce his college choice.

Says ESPN “Pinkston is an absolute horse inside the paint. He's incredibly strong with a tremendous work-ethic, and unmatched toughness and aggressiveness. He's a very high volume rebounder, who is equally effective in traffic or out of his area. The vast majority of his point production comes by the rim albeit in a number of different ways: he runs diligently in transition; knows how to seal and score on the block; goes by or overpowers defenders on his way to the bucket; and finishes everything through contact. He's worked very hard to develop his perimeter skills and while his shooting range now extends to about 18 feet and his handle is solid, pulling him away from the basket takes away from what he does best. Despite being somewhat undersized, he'll have no problems playing the 4 at the next level thanks to his length, athleticism, and physical prowess. Defensively, he's a good on-the-ball post defender thanks to his low center of gravity and also effective from the weak-side because he's so active and quick to rotate."