It's taken a while but we present to you the final piece of the Meet the New Wildcats series: Dominic Cheek.

The interest started at the end of his Freshman year in 2006. Coming out of St. Anthony's High School in Jersey City, Dom Cheek was bred for success under legendary coach and teacher, Bob Hurley, Sr.

Cheek is a long, lean guard who posesses fantastic ball handling skills and a great shot. 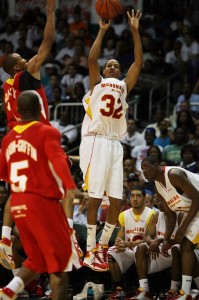 Dom was the 4th player of the Class of 2009 to commit to Jay Wright when he made his announcement on the 12th of December and signed his National Letter of Intent on April 15th.

At St. Anthony's, Cheek was a member of the 2008 (mythical) National Championship High School team and was on the US U18 National Team that playe din the FIBA Americas Tournament.

He was named to the McDonald's and Jordan Brand All American Squads as well as Third Team All-America by Parade Magazine.

Read all of the Dom Cheek articles on VUhoops.com.