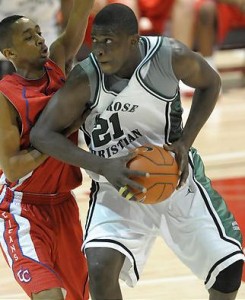 Continuing the center/forwards segment of our Wisdom of Crowds series, our next player is the highly-heralded freshman, 6-10, 250 lb. Mouphtaou Yarou. Use the voting buttons in the right margin of the VUHoops home page to predict the number of minutes you think Mouph will play, and the comment section if you want to explain your thought process. We’ve provided below Mouph’s player assessments from Villanova.com and ESPN.com and a highlight video to hold you over until December.

VUHoops.com also ran a feature on Mouph in July as part of its "Meet the New Wildcats" series.

It said, in part, that “African post players don’t have the best hands, and their defense is way ahead of their offense. That’s what makes Mouphtaou unique. He’s not just a rebounder and shot-blocker. He has a surprisingly polished offensive game.”

Villanova.com: A gifted forward with a throwback approach to the game … Is an effective post-up performer and relentless rebounder … Possesses an uncanny feel for the sport despite having played it competitively in the United States for two years … Good hands and shooting touch. At Montrose Christian Academy: Helped lead the national powerhouse to 22 victories and the semifinals of the ESPN Rise National Invitational Tournament in April … Averaged 20 points, 12 rebounds and three blocked shots per outing while playing for coach Stu Vetter … Spent his junior year at Massanutten Military Academy in Woodbridge, Va., after arriving in the United States from Benin in West Africa … Ranked among the top 30 players in the nation by ESPNU … Selected to play in the Jordan Brand All-Star game at New York’s Madison Square Garden following his senior season …Named MVP of the Capitol Classic.

ESPN.com: ESPN #18 Overall; #7 PF Yarou is an effort guy that is built like a man and imposes his will on his opponent. His is an explosive athlete that is surprisingly skilled and displays a soft touch around the basket when he powers up in a crowd. His hands are strong; when rebounding in traffic he seems to be the one who usually comes out of the pile with the ball, keeping the ball high and delivering a good outlet pass to start the break. He is not a great runner, he labors up and down the floor, but his effort compensates and he gets where he needs to be when he needs to be there. He will need to learn how to hedge screens as he is a target guarding high ball screens. With his big, strong body he marks his territory and occupies the lane, challenging everything that comes at him. He is a good shot blocker that has learned when to “tall up” and when to leave his feet for the block. He has developed into more of an offensive threat from 15 feet in and still has some good upside for the college level.