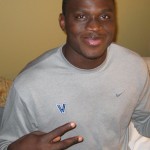 There is a lot of talk going around about people's expectations for Villanova basketball this year. Most of them simultaneously praise the depth of our backcourt, and exercise cautious optimism regarding our (mostly new) frontcourt rotation.

The pundits unanimously have proclaimed that the sky is the limit for this year's version of the Wildcats, IF Mouphtaou Yarou is as good as we all hope. The theory is that Villanova will succeed only if a suitable replacement for Dante Cunningham is found. While most of us believe that Mouph will be effective, the question remains: could Villanova win without him?

With a guard-heavy lineup in 2005/2006, Villanova won a share of the Big East regular season title, a #1 seed in the NCAA tournament, and made an appearance in the Elite Eight. In 2005/2006, the frontcourt rotation consisted of Will Sheridan, Dante Cunningham, an injury-slowed Jason Frasier, Chris Charles, and Shane Clark. While Dante Cunningham contributed as necessary that year, he was hardly the player he became four years later. Jason Frasier, who came into Villanova as one of the most heralded players in his class, had been plagued by injuries and was relegated to picking up his minutes off of the bench. Jay Wright's strongest lineup featured four guards and Will Sheridan for most of the year.

That's not to say that Will Sheridan wasn't a good player (lest I be accused of such a thing). However, in the scheme of college basketball, he was hardly the dominant big that most of the "experts" believe will be the key to Villanova's success. What our frontcourt did in 2005/2006 was provide solid defense, and take advantage of the obvious opportunities on offense. Sheridan's top stat categories were blocked shots and rebounds, after all.

Back to the question I started with: Can Villanova win without Yarou? The only returning frontcourt player from last year's team, Antonio Pena hasn't quite reached Will Sheridan's levels of minutes, rebounding or blocked shots, though he has shown flashes of ability in his two seasons thus-far. Mo Sutton, the redshirt sophomore, brings a ton of height and a great shot-blocking instinct to this year's team, in high school he averaged double-digit rebounding as well. If either of these players develops enough to fill Will Sheridan's shoes, you can expect a good season from the Wildcats.

Players like Taylor King and Isaiah Armwood should also contribute in the frontcourt this semester, and have shown some level of offensive talent. Armwood is an athletic player with a good 15-foot shot (sound familiar?). None of our big men this year may do for us what Dante Cunningham did last year, but the range of frontcourt talent on the 2009/2010 Wildcats will surely produce enough to win quite a few games.

Without a dominant Mouph, the heights that this team can achieve are somewhat uncertain. With an excellent backcourt it may not be necessary to replace Dante Cunningham's scoring but his defensive presence will be missed.

The Wildcats can win without an All-Big East big man this year. Mouph doesn't need to be Dante Cunningham for the 'Cats to have success. Hopefully that won't be the case. I asked Chris Charles what he thought about Yarou, and his response was, "defend, rebound, set good screens & finish inside, I've seen him play this summer. He'll be a beast!"