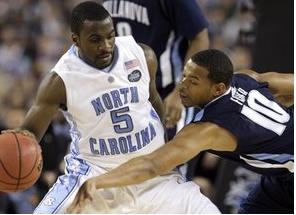 Yesterday, Rivals.com writers Jason King and Mike Huguenin posted their Final Four picks for the upcoming season. While Villanova was conspicuously absent from Mr. King’s list, Mr. Huguenin made no such omission. He predicts that the Cats will be joined by Kansas, Kentucky and Purdue for the Final Four showdown in Indianapolis.

About Villanova he said,

The Wildcats made it to the Final Four last season, and thanks to what should be the nation’s deepest backcourt this season, they will return. Scottie Reynolds’ decision to stay in school was big. So, too, is the arrival of one of the nation’s best recruiting classes. There is no proven frontcourt scorer, but that may not matter with a team this loaded with good guards. Coach Jay Wright can use last season’s run to the Final Four to show his players what they’re capable of when they bear down on defense.