One Charge Dropped for Redding

Share All sharing options for: One Charge Dropped for Redding 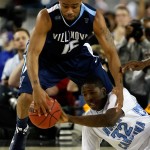 Reggie will still have to answer to the paraphernalia charge.

It is unclear why the prosecutors have opted to drop this charge. The items found in Reggie's car were a bag of a "green leafy vegetable matter" and a grinder. It is possible that the vegetable matter was something other than marijuana, but such a discovery should have lead to both charges being dropped.

It is unlikely that the police officers mistook a bag of oregano for the good stuff. So the dropped possession charge is either an attempt to go easy on a first-time offender or the result of the prosecution's determination that the marijuana (despite being in Reggie's car) was not in his 'possession' for legal purposes.

There may have also been a procedural error involving the evidence. If the police lost the evidence, or can't account for the chain of possession since taking the baggie into evidence, or any of a number of other methods of contamination, the prosecution would be unable to support a case against Redding.

Either way, this is good news for Reggie Redding. One less charge to answer too, and surely a less-serious legal consequence.