Memphis and the Big East

Share All sharing options for: Memphis and the Big East 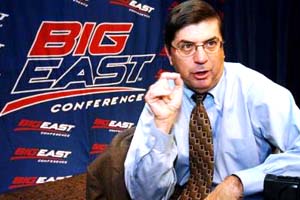 It seems that the University of Memphis may finally be tired of suffering the indignities of membership in Conference USA. This week, it was announced that Memphis had hired former Big East commissioner Mike Tranghese. It is widely believed that he has been charged with the goal of obtaining membership for Memphis in a BCS conference -- and the Big East might be the target.

Partially this is a football move. BCS membership in football is the key that unlocks a door to countless riches. Of the BCS conferences, the Big East is the smallest with only eight football members, which causes an unbalanced schedule. A ninth team would solve that problem for Big East football, but adding another full member would bring the conference up to 17 schools, which is probably an unmanageable number for basketball.

A few years back, when the Big East reloaded it's roster by adding Louisville, Cincinnati, DePaul and USF from Conference USA, Memphis apparently made it known that they wanted to come along for the ride. The Big East snubbed the Tigers at that time. With Tranghese on the payroll, however, it is expected that he will attempt to persuade his best friend and successor, John Marinatto, to open the gates and let Memphis in.

The Big East is desperate to be taken seriously in football, but needs to do so without impairing its status as one of the premiere college basketball conferences. Memphis, of course, is certainly capable of holding up the basketball end of the bargain. However, in order to bring them into the conference, the Big East would have to eliminate another school -- and the one to go would most likely be a non-football school.

There are a number of schools that don't really carry their weight in basketball. South Florida and DePaul have been particularly awful, and Rutgers, Seton Hall and St. Johns have been bottom-feeding for a few years now as well.

It is unlikely that South Florida or Rutgers would be dropped in favor of Memphis, however. South Florida is considered a valuable football member of the conference for both competition and recruiting purposes. Rutgers is a competitive football program (at least lately), and it frankly wouldn't make sense to swap Memphis in for another football school, since that wouldn't resolve the unbalanced schedule.

St. Johns and Seton Hall both have a long history with the Big East conference (both schools were founding members of the Big East) and  both have shown at least some attempts to return to the high level of competition that they were known for in years past.

With the other options eliminated, it would seem that the logical option for the Big East would be to eliminate DePaul to bring in Memphis. However, there is at least one snag... DePaul had a higher home men's basketball attendance than  Cincinnati, Seton Hall, St. Johns, USF, and Rutgers last year. In 2006/2007, they were 7th in the conference in attendance, one spot (and a few hundred tickets) below our very own Villanova Wildcats.

Lets not forget that conferences care about money. Selling tickets and getting games on television is largely a product of the fanbase, and DePaul seems to have one. USF basketball is easily the black sheep of the conference (though for home attendance, Rutgers only averaged around 400 more per game).

My proposal would be to add Memphis as a full member of the conference. Rather than removing a non-football school, however, the Big East should convert USF to football-only status, like Temple once held. That would solve the problem of eliminating a financial and competitive weak link from the conference in basketball, while adding a very competitive program in both revenue sports.

Will it happen? My guess is that the Big East will continue to turn up it's nose at the Memphis Tigers. It would be too complicated to remove a team from the picture at this point. Marinatto will probably exercise some patience and hope to convert Villanova, Georgetown or (preferably, I am sure) Notre Dame into a Big East football member.