Share All sharing options for: More to Life: Nova Football Continues to Roll 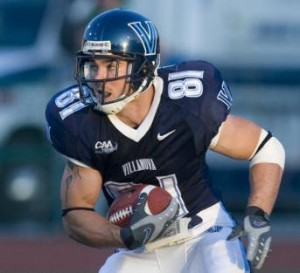 Villanova’s football team (3-0) continued its strong start with a 14-3 win over Penn (0-1). The Cats were ranked #2 in the FCS Coaches Poll last week, behind University of Richmond. Antwon Young briefly replaced an ineffective Chris Whitney (38 passing yards) with 7 minutes remaining in the third quarter. Young gave a struggling Wildcats offense an immediate lift. He capped a 10-play, 78-yard drive with a 5-yard touchdown pass to wideout Brandyn Harvey. Young completed 3 of 7 passes for 21 yards and a touchdown during his two offensive series. He also had four carries for 36 yards. Villanova's victory was its seventh straight over Penn since the series was resumed in 1999, and now has an 8-5 lead in the overall series, which began in 1905.